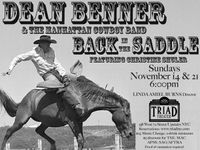 Dean Benner - "Back In The Saddle"

DEAN BENNER returns once again for two performances on Nov. 14 & 21 to The Triad with his 6th Show entitled "Back In The Saddle" Directed by Linda Amiel Burns with Guest Vocalist Christine Shuler. He will be accompanied by the rocking 6 piece Manhattan Cowboy Band. Richard Danley, Music Director on Piano - Peter Calo on Guitar- Matt Gelfer, Violin/Fiddle - Jeff Lampert on Pedal Steel Guitar - Matt Scharfglass on Bass - Dave Silliman on Drums. Both shows are at 6:00PM (Seating begins at 5:30PM). A CD of the entire show, recorded at Dubway Studios, will be given to audience members as a complimentary gift from Dean with every ticket purchase.

“Yesterday…Once More” celebrates the musical legacy of sibling duo Karen and Richard Carpenter. In the 1970s, the Carpenters topped the charts with their fresh, joyful sound, but even their songs with melancholic lyrics brought great comfort, as if commiserating with a good friend. It was no coincidence that throughout 2020, you could find Facebook and YouTube posts from singers of all ages doing their own renditions of Carpenters tunes to soothe their souls. Featuring: musical director Gregory Toroian on piano, Skip Ward on bass, David Silliman on drums. Directed by Lina Koutrakos.

This is a program of all Broadway songs (Sue’s guilty pleasure) done her way or rather, their way…with amazing arrangements from long-time Music Director, Gregory Toroian. These are songs Sue would never be cast to sing, songs sung totally out of context from the show, song with a “new take” and other surprises all done “This Broad’s Way”! Featuring Gregory Toroian on piano, Skip Ward on bass and David Silliman on drums. Directed by Lina Koutrakos.

"Happiness Is Back Country Market & Cafe"

Live at DROM! A night of music from Greece, and other regions! 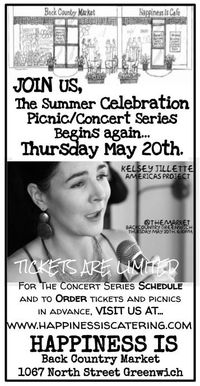 "Happiness Is Back Country Cafe"

I'll be recording "Drums & Percussion" from my home studio on tracks emailed to me. Hit me up so I can add to your tracks!

I'll be playing Percussion with "DJ Lisa"! - Come out for the great Food and great Music!!!

I'll be playing Percussion with "DJ Famous"! - Come out for the great Food and great Music!!!

Drummer and percussionist, David Silliman's middle name should be versatility. Whether accompanying song stylists such as Mariah Carey, Cassandra Wilson, and Blossom Dearie or playing with Colombian Harpist Edmar Castaneda, David's exciting rhythmic energies add color and mood to any musical performance. He's also comfortable playing in the pit of a Broadway show or with the New Jersey Symphony. David has over 20 years of experience. His performances have taken him to concerts and festivals in Italy, Vienna, Berlin, the North Sea, Monterey, Uruguay and Lithuania. David was born and raised in the San Francisco Bay Area, where he was exposed to a wide variety of music. David's first studies were in the Classical field, studying snare drum, xylophone and timpani. Later studies exposed him to Jazz, Latin Jazz, Brazilian and Funk music. Hearing music with a drummer and a percussionist made a strong impression on his playing. Trying to recreate that sound and "feel" with just one person has become a lifetime passion. David's current setup includes a standard American Drum Set augmented with a South American Cajon. Drums from the Middle East, Africa and the Caribbean along with various other percussion and some his own creations surround him. His performances on percussion and drums at the "Umbria Jazz Festival", in Orvieto & Perugia, Italy with Columbian Harpist, Edmar Castaneda garnered praise from critics and audiences alike. "David's unique setup allowed him to move seamlessly from the Cajon, to Drum Set and all the percussive "toys" in between, creating the rhythmic sound and energy of two or three percussionists. Years of playing with Blossom Dearie's trio, showed another side of David's musical talents. Dearie's soft and understated musical styling is matched perfectly with David's softer, highly sensitive drumming. Highlights of David's past work include concert tours with Al DiMeola, Cassandra Wilson, and Leslie Uggams. He also has performed with Aretha Franklin in New York, and is featured on the VH1 Divas 2001 concert.